Posted by erik 22 november, 2018 under Okategoriserade 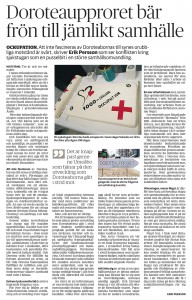 Three years and three months. 1196 days during which citizens took turns to maintain attendance 24/7 at the squatted entrance hall of the health center. Occupation began early 2012 when locals had just enough of the county council’s successive dispossession of resources from the inlands. Sparked by another round of cuts – this time aimed to close the emergency room here in the village Dorotea and to take away the ambulance from next-door municipality Åsele.

There are underlying tensions beyond the particularities. It’s about »them wanting to vacate the inlands«, as one squatter told a regional newspaper during the second day of occupation. This situation is perhaps better understood if perceived as both a specific conflict and as a piece of a grander puzzle of continuous struggle for the right to stay put in territories considered relatively unprofitable in today’s economical structures. It’s easy to be enchanted by the Dorotea villagers’ hard-core resistance. By their continuity of struggle and their affirmed idea that so-called »efficiency plans« are no longer effective if the cost is greater than the savings. Health center squatters are a hard-to-control expense – even more so when they decide to gather 20 000 signatures to force the first ever referendum of its kind in a Swedish county council. It seems that these actions has made it possible to at least sustain status quo. They may even have short-term potential to win certain improvements, although structural conditions really speak to the disadvantage of the insurrectionaries. Looking from the vantage point of today it appears that Åsele will still have its ambulance, after some expensive and parodical attempts to create compromise solutions in the form of what was called a »emergency car« – basically a station wagon with some reflex paint on it. And for the moment it looks like Dorotea will continue to have emergency health care as long as the municipal political party DKL prosecutes the promises that granted them huge amounts of previously Social democratic voters in the recent fall elections.

But greater concerns are however still looming around. Regardless the cycles of local organizing, the depiction of the Västerbotten inlands as a territory plagued by depopulation and stagnation is yet intact. Concentration of power and resources remains its flow towards cities by the coastline.

But, and this is important!
It is hardly the ordinary citizen of coastal cities like Umeå who gains from the development that the Inland insurrectionaries oppose. Umeå’s consensus-marked political goals to attract new inhabitants, tourists and investors are heavily based on speculative success calculations centered on credit financed boasting constructions and marketing stunts in hope of securing the future financing of welfare expenses. Today the outcome, like in most other cases alike, rather seems to head towards increasing deficits that paradoxically is to be covered by vast cuts in everything from schools to eldercare to culture.

Even worse is that the unceasing influx of more inhabitants is not countered by the same enumeration in access to adequate housing, which of course increases rents and mortgage costs. A situation which governing actors now hope to solve trough privatization of common good housing stocks, with the apparent risk that poorer residents are pushed out towards the peripheries by wealthier groups. Other coastal cities with population growth, like Luleå and Skellefteå, has already taken steps down this path during the last couple of years.
The true winners in this contemporary urbanization scheme are rather a few farsighted capitalists concentrated around the real estate market. Parallel to growing municipal and regional deficits there are notable growth in the annual account reports from businesses in those sectors.

It’s somewhat overwhelming to visualize an exit plan from these structures and from the sight of inland communities it might even seem impossible. Instead our days are jammed with easy solution propositions: populist narratives portraying either the immigrants, or the privileged urban dwellers, or other times the »welfare recipient hillbillies« as the reason to all problems. If »they« assimilate, takes responsibility for their advantages or are forced into workfare society will again prevail. Rise towards the light.

During the insurrection in Dorotea some contrasting notions has been circulating in my head – thoughts from Italian theorist Antonio Negri. In a maybe unnecessary complex essay with the title »Counter power« (from the 2003 book »Guide – Cinque lezioni in impero e dintorni«) Negri discusses how seeds of new, more equal forms of societal organization continuously are being produced within everyday resistance and more so in its more organized form: uprisings.
Experimentation with democratic decision making are often inherent. And likewise is the elaboration of collaboration in opposition to Capital’s tendencies towards internecine competition. One can see these traces in the stories from Dorotea where shopkeepers for three years has freely delivered food for the occupation, while health care staff spontaneously provide other kinds of assistance. These are many though small-scale experiences of alternative paths to cater common needs and wants.According to Negri, the challenge is hereby not only to keep expanding and interconnecting islands of resistance against the constituted powers that fails to provide our needs. We must also carefully watch the seeds for alternatives that are inherently planted and experiment in making resilience grow so those relations can reach a societal scale opening the possibility to throw off the leech that is Capital.
Negri has in accordance with these thoughts recently, in particular concerning the political situation in Spain, supported ideas of moving taxation from work to financial transactions, property ownership and the extraction of national resources to finance a guaranteed basic income, which might allow citizens to strengthen structures for creation and distribution of wealth trough free collaborations. Quite an attractive idea for Västerbotten, were almost no one seems to really benefit from the direction we seem to be heading towards at the moment, right?

—
Originally published 2015-07-24 in Swedish by regional daily paper Västerbottens-Kuriren. The Dorotea Insurrection was a struggle between 2012-2015 against regional cuts focusing on saving the Emergency room in the village Dorotea (approx. 1500 inhabitants) and the ambulance service in next-door municipality Åsele (approx. 2800 inhabitants). Both villages are located in the inland parts of the Västerbotten county (approx. 270 000 inhabitants), which administrative center is the city Umeå (approx. 125 000 inhabitants) by the coast. The Dorotea Insurrection was notable for the inhabitants occupation of the local health center for more than 3 years, the campaign for a regional vote on these specific cuts and the ousting of the social democratic party from local power in advantage for a local party called Dorotea kommunlista – the Dorotea municipal list. The cuts where retracted in 2015. This essay was written as the insurrectionaries ended the occupation with the promise of developments in the inland health care.